Basic Physician Training MCQs
Question 1
A 18 year old male presents with multiple grey ulcers in his buccal mucosa, sore throat, difficulty swallowing and multiple vesicles on his palms and soles. Which of the following is the most likely diagnosis?

B: cocksackie virus, also known as hand foot and moth disease is typified by the clinical presentation mentioned in the stem. Group A, type 16 is the most commonest. Rarely, encephalitis, meningitis or myocarditis may develop. Treatment is usually supportive. JAMA Dermatol 2013; 149:1419.

Question 2
A 43 year old female is 4 months post orthotopic liver transplantation for Hepatitis B and NASH cirrhosis. He has had bloody diarrhoea and increasing oxygen requirements. Just recently he has complained of deteriorating vision. The following image is seen on fundoscopy 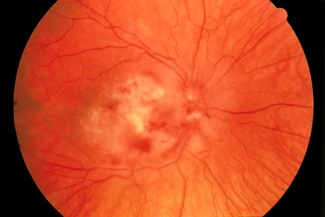 A: picture courtesy of wikipedia.

B. Typically the infection is spread by Aedes aegypti mosquito, which is a day time feeder. Other aedus spp can also transmit the virus, such as A. albopictus. Lancet 352 (9132), 971 – 977
Question 4
What family of virus is responsible for Dengue?

Question 5
A patient who has returned from Sri Lanka 21 days ago presents with fevers, arthralgias, diarrhoea and shortness of breath. He has a non specific erythematous rash distributed throughout his trunk. Based on known incubation period and symptomatology, which of the following infections is this patient NOT likely to have

​Question 6
Relative bradycardia is a feature in all of the following infections EXCEPT?

​E. However before attributing a relative bradycardia to infection, it is imperative that the patient does not have a cardiac pacemaker and is not on medications that can cause bradycardia. Journal of Infection 33(3), 185 – 91

Question 7
What family of virus does Ebola belong to?