Basic Physician Training MCQs
Question 1
What is TRUE with regards to the metabolism of paracetamol and consequently its toxicology?

B: The majority of paracetamol is metabolised through phase 2 metabolism by conjugation to sulphur and glucoronide moieties (90%). The remaining 10% is metabolised through the CYP2E1 > 3A4 system, to NAPQI. NAPQI mediates toxicity if it cannot be bound to glutathione, therefore toxicity occurs when glutathione stores are low relative to the abundance of NAPQI. NAPQI mediates its toxicity as it will bind to any sulfhydryl group in cells, such as simply di-sulfide bridges that account for the tertiary and quaternary structure of proteins and on lipid bi-layers Clin Pharmacokinet 1982; 7: 93-107.

Question 2
What is the rationale for renal involvement in paracetamol toxicity?

A: J Med Toxicol. 2008 Mar; 4(1): 2–6
​
Question 3
What is the mechanism of action of cyproheptadine in the toxicology of serotonin syndrome?

B: It is a first generation anti-histamine that antagonises 5-HT2A receptor. This receptor is implicated in the toxicology of 5-HT. Chlorpromazine is another 5-HT2A antagonist, and is given through an intravenous drip in order to help mitigate severe serotonin toxicity BMJ 2014;348:g1626

Question 4
What is a necessary criterion required for the diagnosis of serotonin syndrome?

B: According to hunter's criterion, which requires a serotonergic drug that has been injected within 5 weeks (because the effects can last that long as the half life in the brain outlives the blood) AND one of the following clinical complexes (a. tremor and hyper-reflexia AND/ OR inducible clonus and agitation/ diaphoresis AND/OR ocular clones and either agitation or diaphoresis AND/OR spontaneous clonus AND/OR muscle rigidity and hyperthermia and inducible clonus or ocular clonus) BMJ 2014;348:g1626

Question 5
What is the greatest risk factor for severe serotonin toxicity? 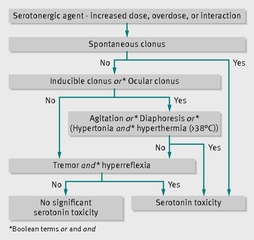 In general, what type of drugs are psychotropic medications?

B: Hence in an acidic environment they are further ionised and this may compound toxicity such as binding to the Na channel in cardiac myocytes. The rationale can be explained by the pKa and H-H equation (RPA lectures 2015)

Question 7
A patient has an overdose of a tri-cyclic antidepressant compound. What is NOT a characteristic ECG change

Question 7
An 28-year-old female was admitted with fever, agitation, sweating, rigidity, tachycardia and hypertension. She was at a friends 21st birthday party where she consumed a number of alcoholic beverages. Her past medical history includes fibromyalgia and chronic pain, for which she is on tramadol 400mg daily. Her investigations are shown below:

What is the most likely explanation for her presentation?
(A) MDMA toxicity
(B) Neuroleptic malignant syndrome
(C) Anticholinergic delirium
(D) Serotonin Syndrome
(E) Cocaine toxicity

​ D: fever, rigidity, and the presence of a substance implicated in the serotonin syndrome BMJ 2014;348:g1626. MDMA toxicity (or ecstasy) would cause hyponatraemia compared to hypernatraemia. Serotonin syndrome may also occur, as MDMA causes massive release of 5-HT AND blocks the re-uptake of 5-HT. This risk is especially true if patients are concomitantly ingesting a CYP2D6 inhibitor such as ritonovir. Hyponatraemia, hepatotoxicity and DIC have all been reported J Psychopharmacol. 2012 Mar. 26(3):408-18. JAMA. 1993 Feb 17. 269(7):869-70