Basic Physician Training MCQs
​Question 1
A 22 year old male with a history of type 1 diabetes is referred to the genetics clinic with diabetes type 1, hypernatraemia co-incident with polyuria and polydipsia, decreased visual acuity and high pitch sensorineural deafness. What is the inheritance pattern of this disease?

B: This patient has wolframs syndrome, which is characterised by diabetes insipidus, diabetes mellitus, optic atrophy and sensory deafness (DIDMOAD). It is an autosomal recessive condition with a carrier frequency of 1:350. The gene responsible for the Wolfram syndrome, named WFS1, encodes an endoplasmic reticulum membrane-embedded protein called wolframin that is expressed in pancreatic beta cells and neurons. Endocrine. 2011 Aug;40(1):10-3, Nat Genet. 1998;20(2):143

Question 2
What is TRUE regarding duchenne's muscular dystrophy?

C: Most mutations occur in the dystrophin gene and are characterised by abnormally elevated creatinine. The muscle defects cross cardiac and skeletal muscle. It is X-linked recessive resulting in progressive weakness of limb girdle muscles Lancet. 2002;359(9307):687.

Question 3
A 36 year old male presents with massive haemoptsis, Hb 78, MCV 62 with multiple pencil cells and increased red cell distribution width. Physical examination reveals multiple telangiectasia on his face and neck. What is TRUE regarding the inheritance pattern of this condition?

B: This condition is also known as osler-Weber-Rendau syndrome, and is AD in mendelian inheritance. It is a disorder of angiogenesis, with elevated VEGF and TGF-beta levels. For this reason, case reports have shown that bevacizumab may work N Engl J Med 2009; 360:2143-2144

​Question 4
What is the correct 6 nucleotide sequence for human telomeres?

Question 5
A 43 year old male has recently learnt that his brother has been diagnosed with huntingtons disease. He is unaware of others in his family with HD, however his parents died in a car accident in their mid 40s. He is examined and found to be neurologically normal. He does not want to be tested for the HD mutation, however he wishes to know what the chance is that he may develop HD later in life. The age-related penetrance of HD in a 47 year old who has inherited the mutation responsible is 50%, rising to 100% by 70 years of age. What is his risk of developing features of huntington's disease in the future? 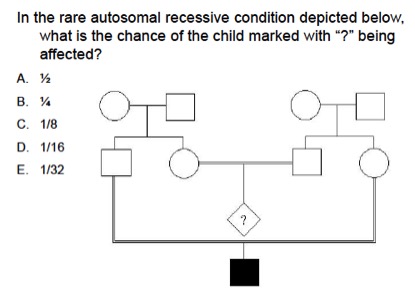 D: Firstly, the parents of the affected child must be carriers and they themselves are NOT affected. This means that the affected child's grandparent must be a carrier. Assuming that an autosomal recessive condition is rare, then the other grandparent is assumed to be homozygous wild-type (this assumption is made to make analysis easier). Therefore, for each parent of the child in question, the probability of being a carrier = 1/2. Therefore the affected child has a probability of 1/2 x 1/2 x 1/4, derived from combining the probabilities of both parents being carriers and that 1/4 will be homozygous mutant.

Question 7
A non-consanguineous couple are planning on having a child. The male partner tells you that his aunt and great-aunt died of spinal muscular atrophy (SMA), an autosomal recessive disorder. The carrier frequency in the general population is 1:40.​

What is the chance of the couple having a child affected with SMA? 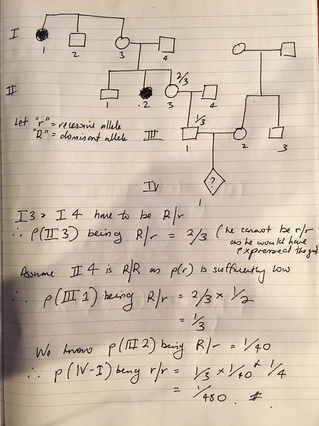 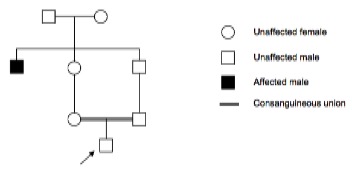 What is the probability of the son of the consanguineous pair being affected by this rare autosomal recessive condition? 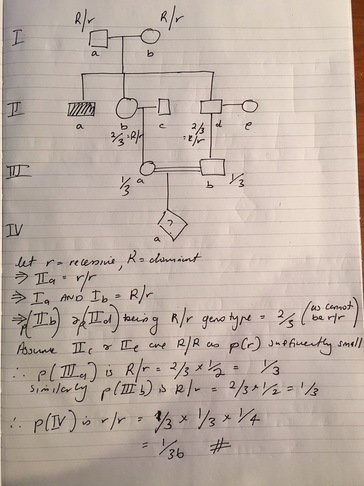 Question 9
​In the pedigree shown below, the affected man has an X-linked recessive disorder. A polymorphic DNA marker has been identified close to the mutant gene responsible for this disorder. The genotypes at this marker are given below each symbol in the pedigree. The recombination fraction between the gene and the DNA marker is 10%.

​What is the best estimate of the risk of the woman indicated by the arrow being a carrier of her grandfather’s disorder?

Question 10
What is the mechanism of action of small interfering micro RNA on gene expression?

D: it interferes with the expression of specific genes with complementary nucleotide sequences. siRNA functions by causing mRNA to be broken down after transcription, resulting in no translation. Microbiol Mol Biol Rev. 2003 Dec; 67(4): 657–685.