Basic Physician Training MCQs
Question 1
Which of the following is NOT an extra-renal manifestation of polycystic kidney disease?

Question 2
What treatment is not considered helpful in the management of cystic kidney diseases?

C: No change in creatinine or reduction in progression to renal failure in ADPKD, but some evidence for slowing of increase in renal volume - only for evorolimus not sirolimus. However there is some evidence in cystic diseases secondary to tuberous sclerosis complex. Tolvaptan may be used, however the absolute benefit in decreasing the rate of increase in cyst size and creatinine is small and the drug would have to be used for 30 - 40 years for a good benefit. N Engl J Med 2010; 363:830-840, N Engl J Med 2010; 363:820-829, N Engl J Med 2012; 367:2407-2418

Question 3
15% of creatinine is secreted from proximal tubular cells into the tubular lumen to be excreted in urine. Which of the following drugs do not cause a rise in serum creatinine by either interfering with the assay or decreasing creatinine secretion?

Question 4
A 34 year old female has resistant hypertension. An angiogram of the renal arteries is shown below 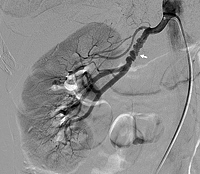 What is the most appropriate management?

Question 9
What is the commonest cause of death with functioning graft within one year of renal transplant according to the ANZDATA compilation?
(A) Cardiac causes
(B) Vascular causes
(C) Infection
(D) Malignancy
(E) Renal failure

​C: In the first year following a renal allograft, infection accounts for 42% deaths. Overall, and at anytime in the patients trajectory, malignancy is the most common cause of death, followed by cardiovascular causes. ANZDATA

Question 10
Which area of the nephron is most susceptible to renal ischaemia?

E: This is because of the distribution of blood supply, with the inner medulla only receiving 5% of renal blood flow. Cortical necrosis implies significant ATN, therefore being a bad prognostic sign - PEP lectures 2014

Question 11
Where does the macula densa lie in the kidney?

Question 12
Where is the majority of sodium reabsorbed?

Question 13
What is the first inciting step in the promotion of rejection of a kidney allograft?

A: Whilst all are important mechanisms, the first event is usually due to ischaemia and reperfusion injury that triggers the upregulation of HLA molecules. N Engl J Med 2010; 363:1451-1462

Question 16
Following donation of a kidney, all of the following are expected changes to the donor except?

A: According to NEJM 2009 (Ibrahim et al), eve at 40 years the probability of survival is the same. However, the cumulative incidence of end stage renal disease is increased in live kidney donors compared to matched healthy controls. References for the other data come from Garg et al. Kidney Int. 2006 Nov, N Engl J Med 2015; 372: 124 - 133
​