Basic Physician Training MCQs
Question 1
A 23-year-old female presents with a rapidly enlarging mass on her neck. A biopsy from a abdominal mass shows a B cell lymphoblastic lymphoma with a high proliferative index (Ki-67 97%). What is the most likely cytogenetic abnormality? 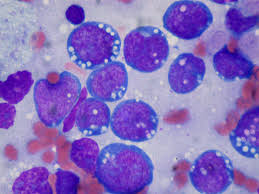 Question 2
What is the definition of a major molecular response in assessing the use of tyrosine kinase inhibitors for the treatment of chronic myeloid leukaemia?

B: The main end point in a number of clinical trials (RPA course, PEP lectures 2014)

Question 3
A 42 year old male has been diagnosed with chronic myeloid leukaemia. He is initially started on imatinib and after 1 year of therapy he shows a major molecular response rate. However on further follow-up testing we find that his bcr-abl transcript has risen. OCT-1 expression testing was sent to Adelaide, and the levels were deemed to be low. What is the next best approach?

A: The reason for the increasing bcr-abl transcript is most likely related to decreased OCT-1 expression. OCT-1 is a transporter that transports itatinib into cells, and this may be overcome by increasing the dose of the compound. Leukemia. 2015 Oct;29(10):1960-9. However, B and C are also reasonable choices. Nilotinib and dasatanib are second generation tyrosine kinase inhibitors that have proven efficacy in CML. Nilotnib increases the risk of cardiovascular disease, whilst dasatanib has been associated with pleural effusions and pneumonitis. Nilotinib when used as front line has proven efficacy above and beyond imatinib regardless of dose and prognostic class. N Engl J Med 2010; 362:2251-2259. Ponatinib is a third generation tyrosine kinase inhibitor that has efficacy in patients with T315I TKI gatekeeper mutations, which render them unsuitable for second generation TKIs. N Engl J Med 2013; 369:1783-1796

​Question 4
What is the percentage of patients with polycythaemia rubra vera who are JAK2 positive?

Question 5
Only 50% of patients with myelofibrosis or essential thrombocytocis have JAK2 mutations. What is the most common mutations seen in the subset of patients with these conditions who are JAK2 negative?

D: Patients who possessed the calreticulin mutation had a more indolent course compared to those that possessed the JAK2 mutation
N Engl J Med 2013; 369:2379-2390

Question 6
What is the mechanism of action of ruxolitinib?

B: Ruxolitinib selectively inhibits JAK1 and JAK2 tyrosine kinases. It has shown efficacy in the treatment of myelofibrosis, essential thrombocytocis and PCV. Side effects include thrombocytopaenia and anaemia. Remember that JAK kinases signal cell proliferation through STAT intermediates. Ruxolitinib has been shown to decrease levels of phosphorylated STAT5. N Engl J Med 2012; 366:787-798

Question 7
A 74 year old male with a prior history of thrombosis has polycythemia rubra vera (JAK2 +). He has a Hb of 186 and a Hct of 0.55. He also has a leukocytocis. What is the best treatment combination for this man?

B: This is high risk PCV as this patient is above the age of 60, has had previous thromboembolic events and has a Hct >0.45. Furthermore leukocytocis is also an independent risk factor for thrombosis. As such, guidelines suggest that this patient should be treated with aspirin, phlebotomy to reduce Hct <0.45 and cytoreductive therapy, possibly with hydroxyurea. N Engl J Med 2013; 368:22-33

Question 8
What is the most common complication of essential thrombocytocis?

B: PEP lecture notes 2014. Note that patients with ET have large megakaryocytes (similar to ITP), a hypercellular marrow devoid of t(9:22), no marrow fibrosis and multilobated megakaryocytes.

Question 10
Which of the following cluster differentiation molecules is used to detect haematopoeitic stem cells (HSCs?)

Which has the highest cumulative incidence of chronic GvHD?
B

Which takes the longest time for engrafment?
C

Which has the highest CD34 yield?
B

A: For unrelated donor, HLA-identical sibling or autologous, the primary cause of death is primary disease. Autologous transplantation is associated with a 1 - 2% treatment related mortality. RPA Course 2015

Question 13
Which of the following is NOT a risk factor for chronic graft versus host disease?

Question 14
A 46 year old female with high risk acute myeloid leukaemia who has a complex karyotype presents has an matched unrelated donor allogenic stem cell transplantation derived from peripheral blood cells. She is day 40 post transplant and she has sccessfully engrafted. Apart from requiring intensive blood product support and febrile neutropenia complicated by gram negative sepsis, she has an uncomplicated post transplant course. She attends the follow-up transplant clinic after having developed a maculopapular rash on the hands and feet. Liver function tests reveal a mild transaminitis and she complains of persistent diarrhoea. A skin biopsy reveals apoptotic keratinocytes. What is the most likely diagnosis?

B: She has had peripheral blood allogenic stem cell transplants from a matched unrelated donor and she has the classical triad for acute GvHD - dermatitis, hepatitis and gastroenteritis. Furthermore the biopsy of the skin is diagnostic - apoptotic keratinocytes, and the onset of her dermatological symptoms is characteristic - within 5 - 47 days. RPA Course 2015, N Engl J Med 2006; 354:1813-1826

Question 15
​A 24 year old female with relapsed ALL undergoes an allogenic stem cell transplant. She is in the immediate post engrafment phase and she develops fevers, chills, dry cough and hypoxia with a low PaO2/ FiO2 ratio. Her chest xray is shown below (Image courtesy off N Engl J Med 2015; 373:2663): 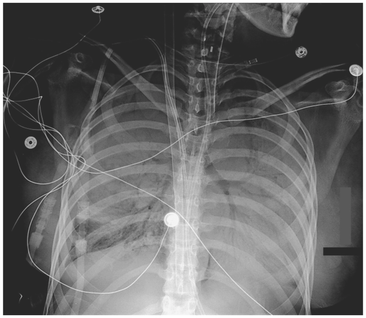 D: "air bronchograms, a radiologic sign in which the air-filled bronchi are visible as a consequence of the opacification of the surrounding alveoli" N Engl J Med 2015; 373:2663

Question 16
A 36 year old male presents with shortness of breath, chest pain and facial plethora. On firther examination there is evidence of cervical lymphadenopathy. Full blood count reveals pancytopenia. Chest X-ray shows a mediastinal mass. A bone marrow aspirate and trephine shows evidence of clumped chromatin and cells without granules. Immunophenotyping is positive for CD2, CD5 and CD7 and absent for CD19, CD20 and CD22, CD33 and CD13. What is the most likely diagnosis?

A: Pancytopenia and mediastinal mass with T-cell CD markers is a classic presentation of T-ALL: RPA Course 2015

Which of the following is associated with AMML and has a good prognosis?
A and D - in addition to core binding factor abnormalities, there is abnormal eosinophils

Which of the following is treated with ATRA +/- arsenic?
B - APML

Which of the following is associated with Burkitts lymphoma?
E

Which of the following is associated with Ph+ ALL?
C

Which of the following is associated with follicular lymphoma?
F

Question 18
A 68 year old female presents with fatigue and night sweats. She is anaemic (macrocytic) but has a thrombocytocis. A bone marrow aspirate shows evidence of myelodysplasia and cytogenetics confirm 5q del phenotype. Apart from transfusional support, what other treatments should she receive?

D: Lenalidomide reduces transfusional dependence, with evidence of cytological remission compared to placebo in patients with 5q- myelodysplasia. " Moderate-to-severe neutropenia (in 55% of patients) and thrombocytopenia (in 44%) were the most common reasons for interrupting treatment or adjusting the dose of lenalidomide." N Engl J Med 2006; 355:1456-1465
​
Question 19
A 64 year old male with polycythemia rubra vera, JAK2 + presents to the haematology clinic for follow-up. He is currently not on any treatment. He has a thrombocytocis of 1500 x 10^6, a Hb 186 and is complaining of headaches, epistaxis and visual obscuration. Which of the following therapies would you recommend.

E: This patient has high risk features for thrombosis (Age >60 OR history of thrombosis AND cardiovascular risk factors) and quite clearly is demonstrating signs of hyperviscosity. This patient should be given aspirin + hydroxyruea + phlebotomies JCO 2011; 29: 761

​Question 20
A 68 year old male who is ECOG 2, has NYHA2 Heart failure and COPD-X Moderate stage COPD presents to the haematology clinic as a new patient. He has Widespread lymphadenopathy, B symptoms, raised B2 microglobulin, unmutated IgH and del 17p. In addition he has flow cytometry demonstrating CD5+ CD19+ and CD23+. Smudge cells are observed on the peripheral smear. He is anaemic and has a thrombocytopenia. Which of the following agents is NOT approved for the malignant condition that this patient suffers?

H: This male has Binet stage C disease CLL (characteristic peripheral smear and flow cytometry), characterised by widespread lymphadenopathy,anaemia and thrombocytopenia. In addition he is frail and has adverse prognostic features such as raised B2 microglobulin, unmutated IgH and del 17p. The PBS has listed obinutuzomab in combination with chlorambucil for frail elderly patients with CLL. Bendamustine has also been used. Ibrutinib is a bruton's tyrosine kinase inhibitor and has evidence in patients with refractory CLL, NEJM 2013; 369: 32 - 42, untreated CLL in patients > 65yo when compared to chlorambucil N Engl J Med 2015; 373:2425-2437, Waldenstrom's macroglobulinaemia that has been pre-treated N Engl J Med 2015; 372:1430-1440, and relapsed or refractory mantle cell lymphoma N Engl J Med 2013; 369:507-516. Idelalisib is a novel PI3k inhibitor that decreases signalling through the PI3K --> AKT --> MTOR signal transduction pathway. It has been used in combination with rituximab N Engl J Med 2014; 370(11): 997 - 1007, or alone  (side effects include colitis and transaminitis) - N Engl J Med 2014; 370

Question 21
What is the most common type of lymphoma?

Question 22
Which of the following genetic mutations is associated with the worst prognosis in AML?

Question 23
With regards to follicular cell lymphoma t(14;18), which of the following is a negative prognostic factor

Question 24
MALT Lymphoma is not associated with which of the following?

Question 25
What is the cluster differentiation marker that distinguishes CLL from mantle cell lymphoma?

Question 26
Which of the following is FALSE regarding lymphoplasmacytic lymphomas?

(A) Rituximab is approved for use
(B) It is an indolent lymphoma
(C) If presentation is with hyperviscosity then plasmaphoresis is urgently required.
(D) Paraprotein IgM may have a cryoglobulinaemic component
(E) IgM MGUS has a higher chance of progressing to IgM Myeloma than Waldenstrom's macroglobulinaemia

E: IgM MGUS has 10% chance of progressing to lymphoplasmacytic lymphoma however does not progress to myeloma. Ibrutinib may be used for the treatment of LPL. RPA Course 2015

Question 27
A 26 year old female presents with an anterior mediastinal mass. Core biopsy through mediastinoscopy reveals diffuse large B cell lymphoma. Immunohistochemistry reveals myc + and bcl-2 + (double hit lymphoma). She is started on R-CHOP chemotherapy regime, and she develops alopecia, sensory dysasthesia to her hands and severe constipation. Which of the following medications is related to her constipation and peripheral neuropathy?

A: RPA Course 2015. Alopecia is caused principially by doxorubicin, an anthracyclin which inhibits topoisomerase, preventing the relaxing of supercoiled DNA.

Which of the following is associated with primary effusion lymphoma
A

Which of the following is associated with Karposi's sarcoma?
A

Which of the following is associated with cutaneous MALT disease
F

Question 29
Which of the following is the classical cluster differentiation cell surface marker of hodgkins lymphoma?

E: Reed steinberg cells, the pathobiological hallmark of hodgkins lymphoma, is derived from germinal centre or post germinal centre B cells and they have acquired a number of antigens, one of which in particular is targeted by a novel therapy brentuximab is CD30. Anaplastic large cell lymphoma is the other lymphoma that expresses CD30. RPA Course 2015

Question 30
A 23 year old female presents with cervical lymphadenopathy, in which the pain is exacerbated by alcohol ingestion. Excisional biopsy reveals architecture resembling hodgkins lymphoma, and flow cytometry indicates a population of CD30+ cells. The patient did not have any B symptoms, and other blood tests were normal. The designation of her disease was deemed favourable early stage. Upon discussion with the patient, escalated BEACOPP chemotherapy regime is selected as it is associated with greater cure at the expense of greater toxicity. Which of the following is NOT an associated toxicity that the patient should be informed of?

Question 31
Which of the following is TRUE regarding brentuximab?