A 68 year-old male with diabetes and stage 4 chronic kidney disease has a catastrophic acute anterior myocardial infarction. After a period of intensive care, he fails to recover and a decision is made to palliate him. He eventually passes away from a sudden cardiac arrest. With regards to the mechanism of acute myocardial infarction, what is FALSE

(A) A thin fibrous cap and punctate calcification are important pathological substrates driving susceptibility for acute rupture of a stable coronary plaque
(B) Macrophages accumulating at the site of the coronary lesion are important pre-determining components for plaque rupture, probably through mechanisms including interferon gamma induced inhibition of vascular smooth muscle collagen production and up-regulation of tissue factor
(C) Collagen breakdown by matrix metalloproteinases may contribute, and are released by macrophages that are activated by CD154 cytokine released from T cells
(D) Superficial erosion of the intima may contribute to 25% of acute myocardial infarctions, and local inflammation may contribute to apoptosis of endothelial vessels revealing a thrombogenic core of proteoglycan
(E) The most important pathological substrate for acute myocardial infarction is the degree of stenosis of the underlying vessel prior to the acute thrombus formation

E: The above are correct, according to a NEJM article published in 2013. Previously it was assumed that small platelet plugs clog up already highly stenosed vessels thus causing the proto-typical STEMI, however what is more apparent is that less stenosed vessels also contribute and perhaps more-so. This explains why re-vascularisation of stenosed vessels does not always reduce the risk of future coronary events, but rather just demand ischemia. It also explains why many myocardial infarctions are triggered without any preceding angina symptoms, rather than the classic demand ischemia prodrome (1).

What is correct regarding stable coronary artery disease?


A: According to an article published in the Australian Prescriber, 2015, left ventricular dysfunction is the strongest predictor of survival. All patients with chronic angina should undergo a thorough history and examination. ECG and ECHO should be undertaken. Assessment of the functional status of the likely lesion can be predicted by stress testing, and the modality depends on whether a resting ECG is normal/ abnormal, whether the patient can exercise or not, whether ECHO or nuclear medicine imaging will lead to the best views. Coronary angiograms can also be performed and may be guided by CT coronary angiograms, endoluminal ultrasound technology and pressure wire guidance in order to determine the suitability of vessels for revascularisation. Beta-blockers are first line, and if not tolerated, then calcium channel blockers should be offered. Short acting nifedipine should be avoided as it may cause reflex tachycardia increasing the mortality of sCAD by increasing myocardial oxygen demand. Statins should be prescribed to all patients with stable coronary artery disease. (2). Wee, Y,; Burns, K, Bett, N. Medical Management of chronic stable angina. Australian Prescriber 2015;38(4):131-136

Pick the correct choice for the following mechanisms of action

Question 4: Is a weak lipophilic beta-blocker that has decreased penetration into the blood brain barrier minimising the side-effect of insomnia, has ß1 activity.

Question 5: A selective beta-blocker validated for its use in heart failure with vasodilating properties secondary to nitric oxide potentiating activity

C – other vasodilating beta-blockers include labetalol and carvedilol

Question 6: A non-dihydropyridine Ca channel blocker that has prominent negative inotropy and chronotropy, and is associated with third degree heart block when used in combination with beta-blockers

F – Not to be used in patients with heart failures and extreme caution in patients taking beta blockers.

Question 8: A Hf current (Na/K) blocker, where the Hf channel is found on SA node and in the retina’s, producing visual effects.

D – no mortality data to support its use in terms of reducing coronary events.

What is CORRECT regarding the indications for the use of CT coronary angiograms in the Australian setting?

B: The test is most useful if performed on patients who are symptomatic of chest pain with a low-intermediate probability according to Framingham risk due to its high negative predictive value (3).

What is the highest population attributable risk of acute myocardial infarction in the Australian and New Zealand population?

D: The major population attributable risk is actually obesity, according to the INTERHEART study published in the Lancet, 2004 – a study of over 52 centres and case-control design. PAR is the number of patients who would be prevented from having an acute MI should that risk be taken out, and relates to both the prevelance of the risk and the strength of association of the risk.

E: PCSK9 is a pro-enzyme whose activity is to decrease the level of LDL-R by binding to EGF-A domain of LDL-R and inducing its breakdown. By inhibiting its activity, there is more LDL-R present, increasing LDL metabolism and ultimately decreasing serum LDL levels. In this NEJM trial, a post-hoc analysis revealed that addition of PCSK9 inhibitor alirocumab in addition to simvastatin decreased MACE (3.3 vs 1.7% placebo) (4)

A 63-year old patient with poorly controlled type 2 diabetes exhibits chronic angina like pain with a positive exercise stress test. A coronary angiogram shows diffuse triple vessel disease with a proximal LAD lesion. A case conference with a cardiothoracic surgeon and the cardiologist decide that coronary artery bypass grafting is the most appropriate choice of re-vascularisation. With regards to the syntax trial (NEJM 2009), what is FALSE about the rationale to embark on CABG rather than PTCA?

A 72 year-old patient who has had an acute myocardial infarction 6 months ago who has been compliant with his dual anti-platelet regime of clopidogrel and aspirin presents with a STEMI in the same vascular territory, and is subsequently diagnosed with in-stent thrombosis. Clopidogrel resistance is considered a cause. What is FALSE regarding the pharmacogenomics of clopidogrel?

(A) Clopidogrel acts on the P2Y12 platelet receptor, and is metabolised by the CYP2C19 system to inactive metabolites. Mutations are well described in the CYP iso-enzymes that make patients rapid clopidogrel metabolisers
(B) PPIs may interfere with the CYP450 bio-transformation of clopidogrel
(C) Clopidogrel is a prodrug that requires biotransformation to an active metabolite by cytochrome P-450 enzymes
(D) Genes encoding the CYP enzymes are polymorphic and certain alleles confer reduced enzymatic function
(E) Reduced function CYP polymorphisms decrease the conversion to active metabolites and decrease the degree of platelet inhibition associated with clopidogrel

What is FALSE concerning the pharmacology of clopidogrel, prasugrel and ticagrelor

(A) Clopidogrel and prasugrel are thienopyridines that reversibly bind the P2Y12 receptor
(B) Ticagrelor requires BD dosing after a loading dose compared to clopidogrel and prasugrel mainly because the binding to P2Y12 is reversible
(C) The time to maximal platelet inhibition is an important consideration in acute coronary syndromes, particularly STEMI, and the higher the loading dose of clopidogrel the shorter the time to peak platelet inhibition (600mg dose taking 2 hours compared to 300mg dose taking 8 hours). Therefore a 600mg loading dose has been advocated for STEMI patients
(D) Prasugrel decreased a combination of death due to cardiovascular causes, non fatal myocardial infarction and non-fatal stroke but not in the group greater than 75yoa or weight <60kg, with patients who had history of ischaemic stroke having poorer outcomes. Overall there is an increase in major bleeding
(E) Ticagrelor when compared to clopidogrel had a non-significant propensity to increase intracranial bleeding but not other major bleeding, with a reduction in a composite endpoint of death from cardiovascular cause, stroke or myocardial infarction.

A: Clopidogrel and prasugrel irreversibly inhibits the P2Y12 receptor for the lifetime of the platelet (5 – 9 days). Ticagrelor is a reversible inhibitor, thus requiring a BD dosing schedule in order to maintain efficacy with regards to platelet inhibition. Option B and C is correct. Prasugrel has the quickest onset time to maximal platelet inhibition (30 minutes), with ticagrelor achieving effects by about 2 hours. Ticagrelor has been shown in the PLATO trial to decrease the primary end point stipulated in option E. Interestingly it causes increase in dyspnoea therefore its use should be cautioned in patients with chronic refractory dyspnoea in heart failure patients and those with COPD. Indraratna, P; Cao, C (2014) New antiplatelet drugs for acute coronary syndrome. Australian Prescriber; 37: 182 - 186

What is the risk of intracerebral haemorrhage with thrombolysis therapy?

B: According to PEP2014 lecture, with second line thrombolysis agents

A 68 year old female presents to a rural hospital 4 hours away from the nearest PCI centre approximately 14 hours after having chest pain. Her ECG shows anterolateral ST elevation with anterior Q waves. The emergency department contacts you urgently with regards to thrombolysis. She has had an ischaemic stoke 12 months ago. She was also kicked in the face about 4 months ago. What is the strongest contra-indication to thrombolysis in this patients case?

E: The Australian guidelines on STEMI reperfusion therapy are clear that re-perfusion should happen within the 12 hr period from time of symptom onset. This patient is clearly out of this timeframe for consideration. Absolute contra-indications include, but are not limited to ischaemic stroke within 3 months and facial or intracranial trauma within 3 months. Patients who have had thrombolysis should be immediately transferred to a PCI capable centre. If thrombolysis has failed (<50% resolution in ST segments or persistent chest pain) then immediate PCI should occur. If thrombolysis has occurred then PCI should occur, but not until 3 hours after the initial thrombolysis. UFH should be used in STEMI patients, and LMWH should be used in the setting of N-STEAC based on weak clinical evidence. If a patient still has recurrent chest pain then the Gp2b3a inhibitor tirofiban can be utilised. Apixaban only has evidence for use in the setting of the cath lab in patients with STEMI (PEP lectures 2014 and 2015).

Question 17
A 72 year old man presents with three syncopal episodes, each lasting for about one minute. Three years previously he suffered an acute anterior myocardial infarction. Examination shows a haemodynamically stable gentleman who is currently pain free, lateral displacement of his apex beat and a pan systolic murmur radiating to the axillae. ECG is shown below. 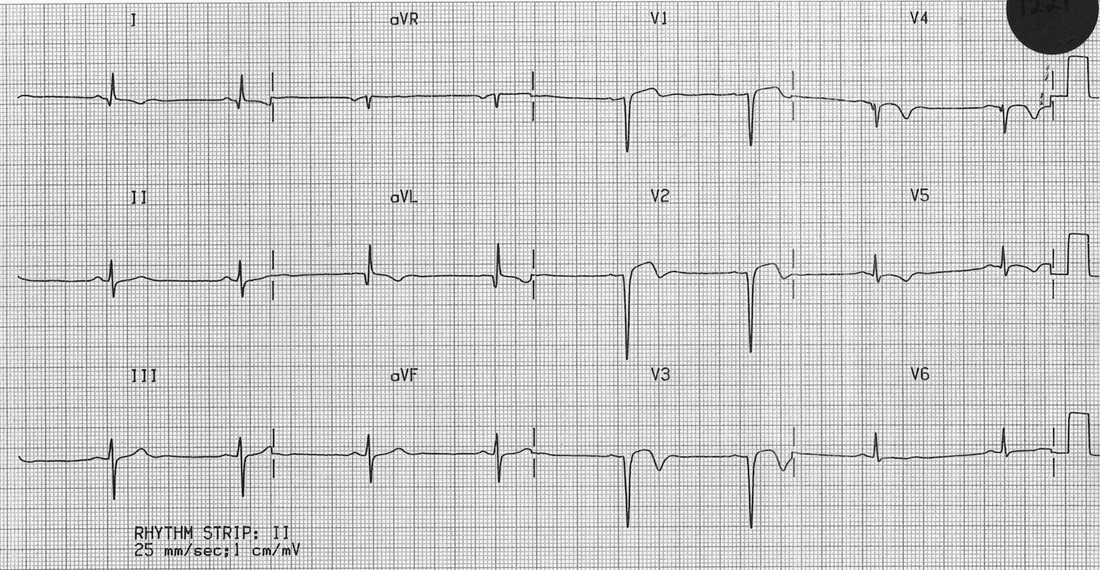 A: He has persistent ST elevation following an anterior myocardial infarction which most likely indicates a left ventricular aneurysm. Image courtesy of LITFL.com, Am J Emerg Med. 2005 May;23(3):279-87.

Question 19
What is the threshold for offering non-invasive imaging or coronary revascularisation for patients with chest pain who have a pre-test probability of coronary artery disease calculated to be 10 - 30%?

Question 20
A 68 year old female with frank metabolic syndrome is referred from the general practitioner with long standing anginal chest pain. She has a history of heavy smoking. Resting ECG shows evidence of left ventricular hypertrophy, but stress exercise ECG shows ST depression. A CXR is normal. Myocardial perfusion imaging shows no inducible ischaemia, and invasive coronary angiogram shows no evidence for stenotic lesions. A diagnosis of cardiac syndrome X is made.

E: There is no evidence for the management of angina secondary to cardiac syndrome X with pharmacotherapy as there is for stable coronary artery disease in terms of secondary prevention to reduce MACE. Stress ECG often shows ST segment depression in this condition. NICE guidelines, Cardiol Clin. 2014 Aug; 32(3): 463–478.

Question 21
Which of the following is most reliably associated with an acute aortic dissection?