Basic Physician Training MCQs
Question 1
What is TRUE regarding the risks of hormone replacement therapy as according to the women's health initiative study?

B: The risk of stroke is increased in women over the age of 60.  Data suggest that the timing of treatment initiation affects the risk of CHD; in the WHI, women who were <10 years since menopause or between the ages of 50 to 59 years did not have excess risk. In the Women’s Health Initiative (WHI), the risk of invasive breast cancer was significantly increased with combined hormone therapy (HT) at an average follow-up of 5.6 years. There is approximately one extra case of breast cancer per 1000 patients on HRT per annum. There is a non significant increase in ovarian cancer risk, but this is controversial. Colorectal cancer risk is reduced. Ann Intern Med 2013; 158:47.

Question 2
What is TRUE regarding periprocedural myocardial infarctions?

B: 65% of patients do not have symptoms of myocardial ischaemia in the perioperative period. Most myocardial infarctions also happen in the first 48 hours for this reason, and some experts have advocated that post-operative troponins be used in order to potentially detect these patients. N Engl J Med 2015; 373:2258-2269

Question 3
A 64 year old female with hypertension and type 2 diabetes who is currently on aspirin attends the perioperative medicine clinic for assessment prior to elective hip replacement. The anaesthetist gives the patient advice on blunting the sypmathetic stress response with the use of either clonidine or beta-blockers. What is the correct response?

(A) Beta blockers used for the purpose of the perioperative period sympathetic response inhibition decreases non fatal myocardial infarctions at the risk of death, non fatal stroke and bradycardia
(B) Clonidine decreases myocardial infarction rates
(C) Clonidine increases the rates of non fatal strokes when used in the periprocedural setting
(D) Beta-blockers should be discontinued in all patients
(E) Clonidine increases the risk of aspiration pneumonia

Question 4
What is the strongest prognostic biomarker for death or myocardial infarction in the perioperative setting?

Question 5
What is the recommended time that vitamin K antagonists should be ceased prior to invasive surgery?

C: guideline suggests stopping warfarin five days before the procedure and restarting it 12-24 hours afterwards, assuming that adequate hemostasis is maintained. BMJ 2015;351:h2391
​
Question 6
A 64 year old male is undergoing a TURP procedure for refractory benign prostatic hyperplasia. He also has atrial fibrillation for which he is on dabigatran. His estimated creatinine clearance is 42 ml/ min. He has previously had minor bleeding events after skin surgery. What is the recommended time prior to the procedure that dabigatran should be witheld? 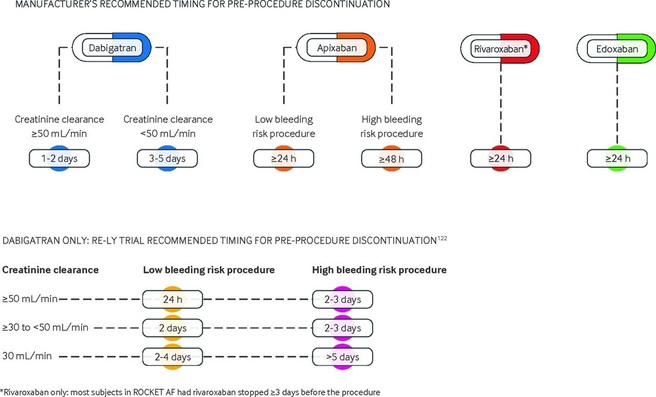 Question 7
A 64 year old male presents with haemetemesis and malena. He is normotensive, tachycardic and immediate fluid resuscitation is instituted. Medications include aspirin and dabigatran. His thrombin time is within normal range, as are his other coagulation studies. His Hb is 64. Platelets are normal. With regards to blood product management, what is the best strategy?

B: There is no significant dabigatran effect as the thrombin time is normal. However, the effects of aspirin on platelets should be countered by platelet transfusion. Cryoprecipitate is enriched in fibrinogen and factor VIII.

Question 8
What is most likely to be found on a skin biopsy of psoriasis?

Question 9
Which of the following is a known cause of raised anion gap metabolic acidosis without raised lactate or ketones?

A: Pyroglutamic acidosis is a rare cause of acidosis that has been described. It is a raised anion gap metabolic acidosis occurring in the context of normal lactate, ketones, normal osmolar gap and no evidence of toxic alcohol metabolites. It may be diagnosed by determination of organic acids in urine. Pyroglutamic acid is synthesised by GGT, which is increased in the setting of decreased glutathione stores. Case studies have showed this type of acidosis to occur in patients with sepsis, use of flucloxacillin (where 5-oxyprolinase is inhibited, which is the catabolic enzyme that degrades pyroglutamic acid) and in other states of decreased glutathione.

Question 10
Non-anion gap metabolic acidosis results from all of the following conditions except?

Question 11
A 32-week old pregnant lady has a motor vehicle accident and suffers from a fractured fibula and bruises to her chest. Fortunately her abdomen is not injured and her fetus remains in good health. She is treated with regular analgesia with good effect. The nurse alerts the medical officer due to decreased level of consciousness. An arterial blood gas is performed which reveals the following variables: pH 7.30, CO2 42, HCO3 21, BE -6, lactate 0.5, Anion gap 8. Which of the following best describes her acid base balance?

Question 12
Which of the following describes the correct association between anion gap and measured variables?

A: The anion gap is a derived variable, mathematically calculated as Na – [ HCO3 + Cl-]. The greatest proportion of the anion gap represents serum albumin, which carries a negative charge.

​Question 13
A 42-year old patient is on continuous veno-venous hemodiafiltration in ICU and is ventilated, after suffering from sepsis related acute kidney injury and ARDS. An arterial blood gas reveals a normal anion gap metabolic alkalosis, with decreased serum albumin and lactate 7. What is the most likely correct interpretation?