E: Hepcidin as an acute phase reactant. Cytokines such as IL-6 can acutely cause an increase in hepcidin levels. None of the other mechanisms are correct. Increased hepcidin levels in chronic inflamamtory anaemia are tyhought to be one of the primary mechanisms. Camaschella, C. Iron-Deficiency Anemia (2015) NEJM; 372:1832-1843

What is TRUE about the mechanism of hereditary Iron Refractory Iron Deficiency Anaemia (IRIDA)
(A) Mutations in TMPRSS6, encoding matriptase-2, causes loss of function mutations. Matriptase 2 is involved in inhibiting signalling pathways that activate hepcidin.
(B) Gain of function mutations in SFX65-box 3 domain causes decreased hepcidin degradation
(C) subtherepeutic iron infusions can overcome the relative resistance and should be prescribed
(D) Mutations in the divalent metal transporter accound for this condition
(E) Hypoxia inducible factor alpha is at supraphysiological levels in this condition

A: All other options I made up! IRIDa is diagnosed on the basis of a failure of haematological response to iron after 4 – 6 weeks of Fe therapy (<1g/dL increment)

E: All the others may be associated with Fe deficiency anaemia. Option E is stupid. In patients with Fe- refractory Fe-deficiency anaemia, H. pylori testing should be offered. Camaschella, C. Iron-Deficiency Anemia (2015) NEJM; 372:1832-1843

Question 4
A 46-year-old woman was admitted with a 7-day history of malaise, lethargy, bloody diarrhoea, haematuria and acute dyspnoea. She is a cattle worker on a farm. She is pyrexial and appears jaundice. There is evidence of pulmonary oedema with a fine petechial rash over her face. Her blood pressure is elevated at 190/90. There is no neurological abnormality identified. Urinalysis shows red cell casts with blood and protein. The following investigations are listed below:

Question 5
What is associated with acquired TTP?

Question 6
Which of the following statements about the clinical manifestation of TTP is FALSE?

​Question 7
A 36 year old black female presents with sudden onset left hemiparesis, a purpuric rash and confusion. Investigations reveal a microangiopathic haemolytic anaemia, thrombocytopenia without evidence of coagulopathy or renal failure. ADAMTS13 activity and levels are decreased. There is an absence of ADAMTS13 autoantibody levels.

What is TRUE regarding the correct interpretation of the diagnostic tests?

A: The decrease in levels of ADAMTS13 combined with the lack of an auto-antibody that would decrease the function of the vWF cleaving protease would lead to a very likely diagnosis of hereditary TTP. Either the patient is homozygous or compound heterozygote. Note that management is with plasma exchange, as this repletes the ADAMTS13. N Engl J Med 2014; 371:654-666, Nature 2001;413:488-494

Question 8
What is the function of ADAMTS13?

Question 9
Which of the following factors is NOT implicated in the pathophysiology of complement mediated thrombotic microangiopathy?

C: Properdin is a compound that stabilises C3bBb, the alternative pathway C3 convertase. Deficiency of properdin is in fact an immunodeficiency state with susceptibility to meningococcal sepsis. Eculizumab or plasma infusions/ plasma exchange may be used to treat this condition. N Engl J Med 2013;368:2169-2181, N Engl J Med 2014

Question 10
The following image shows the metabolic pathway for the formation of succinyl-CoA and methionine from cobalamin and methyl-tetrahydrofolate. Mutation in which component is associated with metabolism associated thrombotic microangiopathic anaemia? 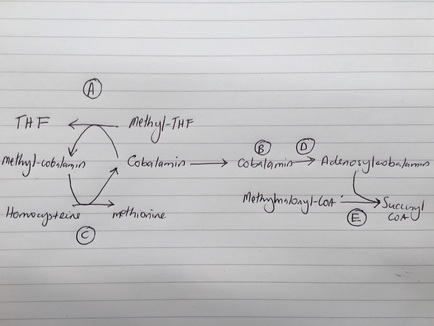 Question 11
What is the most common cause of vitamin B12 deficiency?

Question 12
Which of the following common laboratory markers may help distinguish B12 deficiency from folate deficiency?

B: homocysteine levels are elevated in folate and B12 deficiency, whilst methylmalonic acid levels are elevated in B12 deficiency. The reason is that adenylated-B12 is a co-enzyme in the conversion of methylmalonyl CoA into succinyl CoA. The other important role of B12 is the synthesis of methionine from homocysteine. Methionine is simply the methylated version of homocysteine, and the methylation reaction requires both vitamin B12 (cobalamin) and methyl-tetrahydrofolate. Methionine synthase catalyses the transfer of the methyl group from methyl-tetrahydrofolate to B12, forming methyl-B12. Subsequently the methyl group is transferred back from methyl-B12 --> B12, generating homocysteine --> methionine. The tetrahydrofolate can be used for pyrimidine and purine synthesis. Clinical hematology. Philadelphia: Mosby, 2006:242-51. J Inherit Metab Dis. 2011 Feb; 34(1): 75–81.

Question 13
What is FALSE regarding the neurological manifestations of vitamin B12 deficiency?

D: Neurological manifestations may be grouped into what is known as subacute combined degeneration. Grey matter is not a feature. The most common neurologic symptoms are symmetric paresthesias or numbness and gait problems. Neurological manifestations may occur without anaemia and can be reversed with treatment. In fact one study showed that neurological manifestations are inversely correlated to the degree of megaloblastic anaemia. IM B12 is equivalent to high dose oral B12 and thus this is now the preferred option. This is because 0.5 - 4% of B12 is absorbed passively, and therefore high oral doses (1000ug) can still deliver the same requirement. Blood1998;92:1191-1198, Acta Med Scand1968;184:247-258, Clin Ther 2003;25:3124-3134

Question 14
You are reviewing the blood film of a patient with microcytic anaemia and subsequently perform a haemoglobin electrophoresis. The results show elevation in HbH, however HbA2 and HbF are reduced. Which of the following conditions is this patient likely to have

E: The name implies it. The alpa haemaglobin gene contains two pairs on chromosome 16, accounting for 4 copies. Trait 1 and trait 2 results in one or two mutations. Trait 2 may be cis or trans. Mediterraneans and South East Asians tend to have the cis form, whilst trans is found more in Africa. HbH disease results from three mutations, with only one functional alpha gene. As a result, beta globins precipitate as beta 4. This leads to decreased production, increased haemolysis, target cells and HbH inclusions on peripheral film. Patients become transfusion dependent, demonstrate extramedullary haematopoiesis and may demonstrate iron overload. Hydrops fetalis results from mutations to all four alpha globulin genes and causes barts Hb = gamma 4. Beta thalassemia results in increased HbA2 concentrations and HbF concentrations.N Engl J Med 2014; 371:1908-1916

Question 15
Which condition results in the lowest level of hepcidin?

A: In thalassemia intermedia, patients are not transfused thus there is a high erythropoietic drive secondary to haemolysis and innefective erythropoiesis. The increased EPO results in decreased hepcidin. Thal major leads to secondary iron accumulation secondary to transfusional dependence. This increases iron levels, increases iron sensing and decreases hepatic synthesis of hepcidin. Hepcidin is increased in anaemia of chronic disease and anaemia of renal failure. This causes downregulation and internalisation of ferroportin therefore decreased Fe absorption and release of Fe from body stores. Origa et al, haematologica 2007

Question 16
Patients with beta-thalassaemia are at risk of infection. Which of the following infections is NOT associated with this condition