Basic Physician Training MCQs
Question 1
A discussion took place on how to improve the management of patients presenting with sepsis. What best describes a care bundle in this scenario
(A) A medical checklist for doctors to ensure that ALL steps are completed in a timely fashion
(B) A group of evidence based processes that are designed to be completed sequentially, and when performed together improves clinical outcomes
(C) A sequence of procedures designed to maximise patient safety
(D) A sequence of procedures designed to optimise allocation of resources
(E) steps in patient management that must be completed sequentially within a defined time period

Question 2
The following table is from Circulation2012;126:1630-9, which depicts a meta-analysis of bridging versus non-bridging strategy for peri-procedural management of warfarin. Bridging therapy is when heparin or clexane is used perioperatively when warfarin is ceased.

Question 4
In a large randomised control trial of the use of nivolumab in non small cell lung cancer, the methodology reportedly employed a double blinded technique. Which of the following statements is FALSE with regards to this technique in clinical trials

A: Selection bias is mitigated by entering into strict randomisation of a representative sample. Information bias (or objective bias) occurs when information is collected or analysed in a different matter by the investigator between groups. For example, if investigators are not blinded to an anti-depressant drug, and they are aware of which group is treated, then their interpretation of data may be skewed.

Question 5
The Re-LY trial examined the effects of dabigatran versus warfarin in the prevention of stroke in patients with atrial fibrillation. An intention to treat analysis was used. What is true with regards to this type of analysis?

(A) It performs analysis on all patients immediately post randomisation who were assigned treatment and control, irrespective of drop out due to side effects and compliance
(B) It avoids introducing bias into the assessment of treatment based on the toxicity of the drug
(C) It reduces information bias
(D) It reduces selection bias
(E) It over-estimates treatment effects

E: Intention to treat analysis is carried on all the patients who were intended to receive the drug, and thus reduces bias (both selection and information). It always under-estimates the effects of treatment and is thought to be a conservative measure.

​Question 6
Answer the following question based on the graph presented by AIHW (2008) in relationship to trends associated with COPD in Australia. 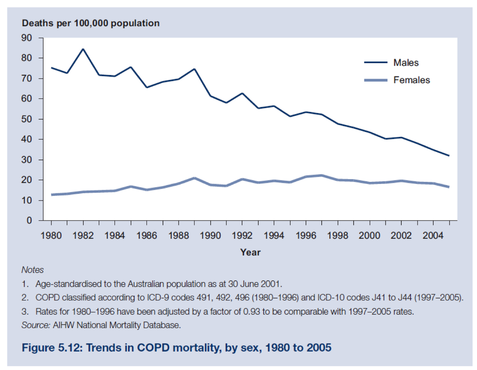 ​Question 7
What is Australia's population according to the Australian Bereau of Statistics in June, 2015