Basic Physician Training MCQs
Question 1
Which of the following is not a contraindication to thrombolysis for acute ischaemic stroke?

Question 2
What is the lifetime prevalence of stroke?

Question 3
A 32 year old male presents to ED at 11pm with a sudden onset headache 4 hours earlier. She describes the event as suddenly being hit on the head. Subsequent to this she experienced an ongoing sudden severe occipital headache and vomiting. The provisional diagnosis of a subarachnoid haemorrhage is made. CT scanning however is unyielding. What is the most appropriate next step in the management?

D: An MRI has a sensitivity similar to that of a CT, therefore a negative MRI in this instance would still result in the patient having to progress to a lumbar puncture. 12 hours have to elapse prior to undertaking LP for the detection of xanthochromia. Under these conditions the sensitivity of this test is greater than 95%. Stroke. 2012 Jun;43(6):1711-37

Question 4
With regards to the treatment of subarachnoid haemorrhages, what is FALSE?

(A) Coiling achieves more superior outcomes than clipping in terms of mortality
(B) Coiling is associated with more re-bleeding rates
(C) Blood pressure should be kept to a level <160mmHg
(D) Nifedipine should be used within 4 days and to a total of 21 days post index event
(E) Hydrocephalus should be suspected in any patient with neurological deterioration, and this should be treated with a ventricular shunt

D: Nimodipine is favoured, and has been shown to improve neurological outcomes when used in this situation acutely. Coiling has less mortality but greater re-bleeding rates. The dose is nimodipine 60mg QID. The original hypothesis is that it prevented cerebral vasoconstriction however this is only speculative. N Engl J Med. 1983;308(11):619, J Neurosurg. 1988;68(4):505. BMJ. 1989;298(6674):636.

Question 5
What is the most common stroke mimic?

Question 6
A 68 year old chinese male presents to the emergency department with a right facial droop that spares his nano-labial folds with associated speech changes. He makes a spontaneous recovery within 4 minutes. His blood pressure is 168/98. His LDL cholesterol is 1.75, with total cholesterol 4.3. A CT-B and CT-A are normal, as are MRI diffusion weighted images. An EEG shows a normal background posterior rhythm. Hotter monitor did not show any evidence of AF. What is the most appropriate management for this patient?

C: In chinese patients, the ARR of adding aspirin and clopidogrel as anti-thrombotic therapies was beneficial (ARR 3.5%) over aspirin alone, only if followed for 3 weeks then changed to clopidogrel mono therapy. Regardless of the lipid levels, a statin should be prescribed. Blood pressure should be reduced to < 140/90, however there is now mounting evidence for greater cardiovascular outcomes of blood pressure <120/80 as per the SPRINT trial - but the results did not include diabetic patients. N Engl J Med 2013; 369:11-19; November 9, 2015DOI: 10.1056/NEJMoa1511939 - SPRINT trial; N Engl J Med 2012; 366:1914-1922

Question 7
Which group of patients would most benefit from carotid endarterectomy?

Question 8
A 64 year old male with a past history of type 2 diabetes presents to the ED 3 hours after noticing a dense right sided weakness. His partner also noted him to have eye deviation to the left side. He had surgery 7 months ago to repair an inguinal hernia. He has no bleeding diathesis. Examination reveals expressive aphasia with concomitant right sided dense motor-sensory deficit. Blood pressure is 145/76. His NIIHS score is 23. A CT brain is reported as normal. Blood tests reveal an INR of 1.6 and platelet count of 142. What is the most appropriate management?

Question 9
A 74 year old male presents to the emergency department with symptoms consistent with a left sided MCA stroke. There is no significant oedema or mass shift or haemorrhage on initial CT scan, however there is a large infarct size > 1/3 of MCA territory. A decision of not to thrombolyse is made given the imaging findings. A hotter monitor however reveals the patient has atrial fibrillation. What is the most appropriate management

B: Dabigatran at 150mg BD has superiority over warfarin in terms of stroke prevention, but with similar bleeding rates. 110mg BD dossing is non-inferior to warfarin with lower bleeding rates. Gastrointestinal bleeding was higher with the NOACs, and the agents shouldn't be used if CrCL <30 (apixaban may be used if CrCl >= 25). Australian guidelines say that up to 2 weeks delay in initiating anti-coagulation therapy is reasonable. N Engl J Med 2009; 361:1139-1151. However, if the patient had valvular AF, then NOACS have no place and can actually do harm (increased risk of bleeding and thromboembolic complications) N Engl J Med 2013; 369:1206-1214. ​

Question 10
Which of the following is FALSE regarding the management of acute ischaemic stroke?

Question 11
What is the rate of chiropractic neck manipulations that result in a carotid or vertebral artery dissection?

C: This is at least 5 - 10x the population rate ( 2.5 - 3/ 100 000). This however may be an over-estimation of the true value because 25% of these patients actually had connective tissue diseaseand the initial symptoms of vertebral-artery dissection commonly mimic the musculoskeletal neck pain for which people go to chiropractors N Engl J Med 2001; 344:898-906.

Question 12
What symptom is NOT typically associated with dissection of the internal carotid artery?

D: Oculosympathetic palsy, consisting of miosis and ptosis, has long been recognized as a typical manifestation of carotid-artery dissection, but it is found in less than half of patients. Facial anhidrosis is not present because the facial sweat glands are innervated by the sympathetic plexus surrounding the external carotid artery. Cranial-nerve palsies can be detected in about 12 percent of patients with carotid-artery dissection. The lower cranial nerves are the most commonly affected, particularly the hypoglossal nerve, and the involvement of various combinations of nerves has been described. N Engl J Med 2001; 344:898-906.

Question 13
Which of the following is a recognised treatment option for carotid or vertebral artery dissection?

B: One approach is to anticoagulate initially with UFH then bridge to warfarin therapy, maintaining INR 2.0 - 3.0. Subsequent to this MRA can be performed, and if there are further luminal irregularities then anticoagulation may continue for a further 3 months. N Engl J Med 2001; 344:898-906

Question  14
A 64 year old female with poorly controlled hypertension presents acutely with sudden flinging movements of her left arm and leg. This movement has caused her to injure her left leg. An MRI of her brain would most likely reveal a lesion in which of the following sub-cortical structures?

A: It is widely acknowledged that the majority of causes of hemiballismus occurs due to lesions in the subthalamic nucleus on the contralateral side to the deficit. The most common aetiology being hypertensive disease, however inflammatory plaques from diseases such as multiple sclerosis may also cause a similar picture. Other aetiologies include non-ketotic hyperglycaemia, and when pharmacological treatment is necessary, haloperidol, chlorpromazine and topiramate has been used. Lancet Neurol 2006; 5:589. J Neurol 2004; 251:725.

Question 15
A 58-year-old man was admitted with a history of occipital headache of sudden onset associated with nausea, vomiting, vertigo, double vision and slurred speech. On examination, he was confused and had mild dysarthria. There was no neck stiffness. He had normal tone and power in his limbs with normal reflexes. Sensation seemed normal but was hard to assess because of his confusion. A CT scan was performed (radiopedia.org) 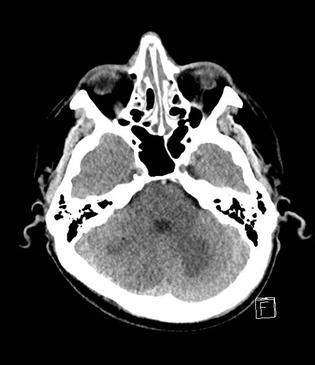 Question 16
What is not associated with bilateral parietal lobe involvement, known as Baliant syndrome?

E: ​"Baliant syndrome results from damage to both parietal lobes. Clinically, it includes three main symptoms: simultanagnosia (the inability to see more than one object at a time); optic ataxia (the fixation of gaze with severe problems in voluntarily moving fixation); and optic apraxia (the inability to reach towards the correct location of perceived objects" It can occur with dementia. Balint's syndrome lose spatial information outside their own bodies and are functionally blind except for the perception of one object in the visual scene at a time. Their spatial abilities are so impaired that they cannot locate the item they can perceive." Nature Reviews Neuroscience 2003 4, 93-102

​Question 17
The Re-LY stroke trial examined the efficacy of dabigatran compared to warfarin in the prevention of thromboembolic stroke in patients who have atrial fibrillation. Which of the following results was not an outcome from that study?

Question 18
A 79-year-old man was admitted with a middle cerebral artery infarction confirmed by a CT scan of head. He was in atrial fibrillation and had no contraindications to starting warfarin. He made a good early recovery. What is the general recommended time to wait prior to starting anticoagulation therapy for this patient?

C: According to the Australian stroke guidelines 2010, the decision to anti coagulate can be delayed up to 2 weeks. The NICE guidelines suggest that one should wait 2 weeks prior to initiating anticoagulation.

​Question 19
A 34 year old male presents acutely with quadraplegia and complete paralysis of his facial muscles. He is able to move his eyes and blink on command. Where is the most likely lesion?

D: This is a case of locked in syndrome, which most frequently involves the ventral pons where the corticospinal tracts and corticobulbar tracts are concentrated.

A: The lateral medullary artery syndrome can occur with dissection of the vertebral artery or thrombus into the posterior inferior cerebellar artery. The infarcted tissue lies in the lateral medulla, including CNVIII vestibular nuclei, causing dizziness, CN 5 nucleus causing ipsilateral pain and temperature loss in face, dysphagia and hoarseness secondary to nucleus ambiguous (motor CNX) involvement, and contralateral pain and temperature loss secondary to lesions that are above the decussation point for the spinothalamic tract. Horner's syndrome occurs because of involvement of descending sympathetic tracts. Image below courtesy of medchrome.com

Question 21
A 96 year old male presents to the emergency department confused and disoriented. A neurological examination reveals that, despite him saying so, there is readily demonstrable blindness. When asked to name objects, he misnames them. What is the name given to this syndrome?

D: Typically caused by bilateral lesions in the occipital lobes leading to a visual anasognosia

Question 22
A 84 year old male presents with weakness to Bathurst emergency department. A neurological examination reveals the patient to have left sided arm and leg weakness, right sided tongue fasciculation's and weakness with deviation to the left and left sided loss in light touch, vibration and proprioception. Where is the most likely lesion?

A: This is an example of medial medullary syndrome. This is a rare neurological syndrome and occurs from infarctions involving the basilar artery or vertebral artery territory. The lateral medullary syndrome is much more common in aetiology. Neurology 1997 Apr;48(4):882-90. Image courtesy of vertigoexercisesus.com 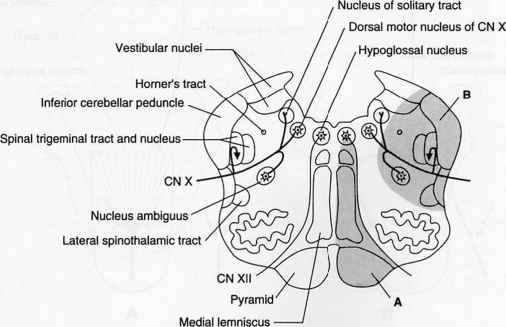 Question 22
What is the quoted percentage of fatal intracranial haemorrhages that occur during the initial 7 days after the use of intravenous alteplase?