B: RPA lecture notes: The incidence is rising in females as this follows the trends of smoking. Adenocarcinoma is the commonest cause of lung cancer in Australia now. It is a sub-type of non-small cell lung cancer.

Question 3
A 51 year old female from Dubbo is electively admitted for investigation of a lung lesion. She has a CT scan that shows a large right sided lung lesion with bilateral hilar lymphadenopathy. What is the reason for organising a PET CT?

A: RPA course, helps to rule out metastatic disease.

Question 4
What epidemiological feature is most in keeping with a patient with EGFR activating mutations?

Question 5
What epidemiological feature is most in keeping with a patient with EML-ALK gene re-arrangement?

Question 6
What is the most common side-effect of erlotinib?

Question 7
​According to the PBS, what group of patients are ineligible to receive erlotinib?

Question 8
What is the level of positive cells, as determined by fluorescence in-situ hybridisation, that are required in order to qualify for crizotinib treatment?

B: A FISH + for EML4-ALK break apart gene re-arrangement is required for PBS funding of crizotinib. The number of cells required are > 15% (pbs.gov.au)

Question 9
What is NOT a common side-effect of crizotinib

Question 10
A 62 year old man from Lismore presents with weight loss, night sweats and chest pain. A chest x-ray initially reveals a large spiculated lesion in the chest. He underwent a PET scan (left image) which is shown below. Biopsy revealed adenocarcinoma of the lung with EGFR mutation, negative EML4-ALK FISH study. 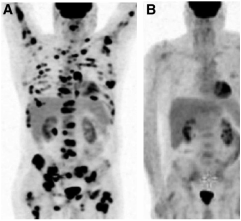 What is the correct treatment option?

A: stage 4 adenocarcinoma with EGFR +, ALK gene re-arrangement -. Nivolumab is also an option but not licensed in Australia

Question 11
What is the most common type of mutation in non small cell lung cancer?

B: Predicts resistance to targeted therapies (RPA lecture series)
​
Question 12
A 67 year old Asian female is diagnosed with stage 4 adenocarcinoma of the lung. Driver mutation testing identifies an EGFR mutation. She is subsequently started on erlotinib. 3 weeks after she describes an acneform rash on her face and torso, which is pruritic and tender. It has severely impacted on her self esteem and she does not want to go outside for fear of embarrassment. What is the most appropriate treatment initially for this patient?

C: This is a grade 3 TKI rash. If rash does not improve with these measures then the TKI should be stopped until the rash improves to grade 1 and consideration of dose reduction made. RPA Course 2015

Question 13
Which of the following is NOT a well known side effect of Crizotinib?

E: Visual disturbances are a common side effect of Crizotinib, which inhibits the action of the anaplastic lymphoma kinase. It is hypothesised that this molecule binds to rods and cones. The effect is short lived. Pneumonitis occurs in less than 2% of patients. Colitis is not a well known side-effect. RPA course 2015