Basic Physician Training MCQs
Question 1
What is the importance of the P1 receptor present on mast cells and eosinophils?

C: adenosine is an endogenous ligand for the receptor, and it is a g-protein coupled receptor

Question 2
A 29 year old lawyer from Brisbane presents with recurrent soft cutaneous tissue swelling, lip swelling and shortness of breath with a choking sensation. Her mother and her mother's twin sister both had a similar condition. She is currently hypotensive and has a respiratory rate of 40, saturating at 92% on room air. Apart from instituting fluid resuscitation and fluid therapy, and assuming the patient is in a tertiary referral centre, what is the most appropriate management step?

E: hereditary angioedema occurs due to a deficiency of C1 esterase inhibitor, and lack of inhibitors leads to uncontrolled activation of C1 and therefore consumption of C4 and C2. Complement mediators lead to release of vasoactive mediators such as kinins. C3 is not decreased as it is controlled through other means. The way in which kinins are involved in this pathogenesis is through C2 --> C2b (which is acted on by plasmin) to become C2-kinin. This process is normally inhibited by C1-INH. To test, require C4, C3 levels as well as levels of C1-INH and C1-INH activity. Type 1 is due to decreased production of C1-INH, type 2 is due to decreased function of the protein. Acquired angioedema may also occur and are typically associated with B-lymphoproliferative disorders secondary to the consumption of C1-INH. Adrenaline has no use in this syndrome, and C1-esteralse inhibitor concentrate should be used. If not available, then FFP is an alternative. Immunology4bpts course. Immunobiology 1998; 199:377. Allergy Asthma Clin Immunol 2010; 6:20.

Question 3
Which of the following complement components is the most potent anaphylatoxin and chemotactic factor?

A: C5a > C3a >>C4a. They are designed to act locally to facilitate acute inflammation and when released in excess they can mediate anaphylactic shock.

Question 4
What is the mechanism of ACE-inhibitor induced angioedema

Question 5
Icatibant has recently shown efficacy in the treatment of ACE-inhibitor induced angioedema and in hereditary angioedema. What is its mechanism of action?

A: icatibant is a selective B2 bradykinin receptor antagonist, and has shown efficacy in the treatment of ACE-inhibitor related angioedema. "Among patients with ACE-inhibitor–induced angioedema, the time to complete resolution of edema was significantly shorter with icatibant than with combination therapy with a glucocorticoid and an antihistamine". "The median time to complete resolution was 8.0 hours (interquartile range, 3.0 to 16.0) with icatibant as compared with 27.1 hours (interquartile range, 20.3 to 48.0) with standard therapy (P=0.002)". N Engl J Med 2015; 372:418-425

Question 6
Which of the following immunoglobulin subtypes is MOST potent at activating complement?

​Question 7
What is the mechanism of Eculizumab?

C: Eculizumab, which has shown evidence for its use in PNH and atypical HUS, inhibits the terminal complement protein C5. Intravascular hemolysis is a prominent feature of PNH and is the consequence of the absence of the GPI-linked complement regulatory protein CD59. CD59 blocks the formation of the terminal complement complex (also called the membrane-attack complex) on the cell surface, thereby preventing erythrocyte lysis and in vitro platelet activation N Engl J Med 2006; 355:1233-1243; N Engl J Med 2013; 368:2169-2181

Question 8
What is false about the alternate pathway of complement action?

D: C3bBb is stabilised by properdin. There is a rare X-linked deficiency of properdin, leading to fulminant meningococcal septicaemia. The alternative complement pathway is activated by microbial cell stabilisation of C3b. Factor D is able to allow the bound factor B on C3bB --> C3bBb. This is subsequently stabilised by properdin, and is the alternate pathway C3 convertase. The classical (and mannose binding lectin) pathway C3 convertase is C4bC2b. The C3 convertase catalyses C3 --> C3a + C3b, and the alternate pathway C5 convertase is C3bBbC3b, whilst the classical complement (and mannose binding lectin) component C5 convertase is C4bC2bC3b. The C5 convertase catalyses C5 --> C5a + C5b, where C5a is a potent chemokine and anaphylatoxin. Nat Rev Immunol 2009; 9:729.

Question 9
What is the most common time frame that ACE-inhibitor associated angioedema occurs?

Question 10
What cut-off is generally considered significant for ANA +

B: RPA course, note 20% of adults, especially females may have ANA +

Question 11
Which of the following is NOT a target of ANCA?

Question 12
Which of the following antiphospholipid antibodies is associated with the greatest risk of thrombosis?

Question 13
Which of the following is not a major protein fraction seperated by zone electrophoresis?

E: No such thing as delta globulins on EPG, gamma globulins are present, this is where the M protein is detected and quantified using densitometry. The first picture is a normal EPG and the second picture denotes a paraprotein. The process of immunofixation EPG involves multiple wells, whereby the patients serum is run on a number of different wells, with a control, following by the addition of precipitating antibodies (IgG, A, M, E, G, kappa, Lamda) to detect the type. 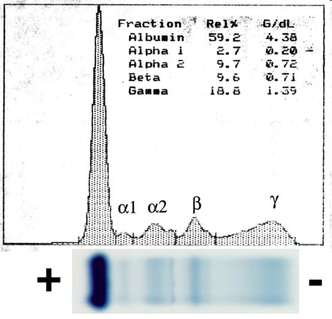 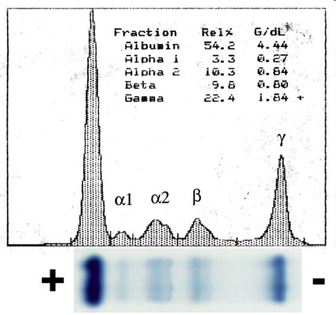 Question 14
Which of the following is NOT a live attenuated vaccine?

​Question 15
Interferon gamma and IL-2 are involved in the conversion of Th0 cells to which subtype?

Question 16
IL4, IL5 and IL13 are involved in the conversion of Th0 cells to which subtype?

Question 17
IL17, IL21 and IL22 are involved in the conversion of Th0 cells to which subtype?

Question 18
IL10 and TGF-beta are involved in the conversion of Th0 cells to which subtype?

Question 19
With regards to transplant immunology?

Question 20
What is FALSE regarding co-stimulatory molecules?

(A) CD80 and CD86 on antigen presenting cells have affinity to CD28 and CTLA-4 on T cells
(B) CD80 and CD86 have higher affinity for CTLA-4 than CD28
(C) Belatacept is a combination of CTLA-4 with Fc, thus blocking CD80 and CD86 binding to CD28, preventing co-stimulation activation
(D) CD40:CD40L interaction is an important co-stimulator
(E) CD3 interaction with Fox-P3 receptor alpha decreases T cell activation

E: This is entirely made up by me!