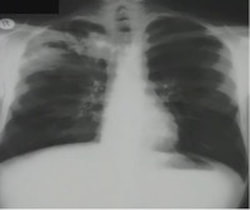 A: Right upper lobe consolidation, increased chest pain, progressive breathlessness, decline in FEV1, eosinophilia with raised IgE are classic of ABPA. ABPA occurs in 15% of CF patients. They should be treated with corticosteroids and either itraconazole or voriconazole. Itraconazole given for 16 weeks appears to be steroid sparing (Thorax 70:270, 2015), decreasing number of exacerbations. IgE >1500 signifies severe disease, however >5000 would imply a diagnosis of atopic dermatitis (RPA lecture series 2015, PEP lectures 2015)

C: Data from 2014 indicate that median survival is 41 years. The oldest patient at the RPA clinic is 66 years apparently!

Question 3
Females tend to die quicker of CF and have exacerbations during the follicular phase of their menstrual cycle. What is the rationale for this

B: ​Accoring to a NEJM publication, Increased oestrogen during the follicular phase increases sputum viscosity, and therefore leads to increased exacerbations during this phase of the menstrual cycle in females N Engl J Med 2015; 372:351-362.

Question 4
How many classes of mutations are there in cystic fibrosis?

C: The first 3 mutations are known to decrease CFTR function and are more severe. Class 1 includes deltaF508, class 3 includes G551D, a mutation class that can benefit from ivakaftor, a channel potentiator. Lumicaftor combined with ivakaftor for deltaF508 has shown some benefit in research trials but is not yet available in Australia on the PBS. Ivakaftor is liscenced through the PBS for CF patients with G551D mutation or other Class 3 gating mutations. It cannot be given with CYP3A4 inducers (PBS.gov.au, RPA lecture 2015 Prof Peter Bye).

Question 5
A 38 year old female with cystic fibrosis develops an acute exacerbation of her cystic fibrosis during the follicular phase of her menstrual cycle. She has a stormy course coinciding with progressive decline in FEV1 and type 2 respiratory failure. Sputum culture isolates show Burkholderia cepacia. With regards to this pathogen, what is FALSE

(A) The 1 year mortality is 40%
(B) Pathogen fails to respond to ahminoglycosides, tazocin and ceftazadine
(C) Chloramphenicol has been used as a treatment in these patients
(D) It is associated with a POOR prognosis

A: The 1 year mortality approaches 62% (Stanford Antimicrobial guidelines 2015). Unfortunately many patients colonised with B. cepacia are not transplant candidates due to a significant one year mortality.

Question 6
What is FALSE regarding the pathology of cystic fibrosis

(A) Oestrogen increases the viscosity of mucus secretions
(B) Thick mucus secretions are due to hyper-absorption of Na in mucus, leading to osmotic dehydration of mucus
(C) Acidic mucus due to defect in bicarbonate secretion through the CFTR channel may account, in part, for decreased intraluminal airway defence
(D) CFTR may play an important role in development of the upper airways during embryogenesis
(E) A combination of impaired mucocilliary transport and impaired antimicrobial defence may account for the fact that cystic fibrosis tends to a poorer prognosis compared to primary colliery dyskinesia.

B: Hyper-absorption of Na through ENaC channels were once thought to be responsible for impaired mucocilliary transport. All the other elements are true. N Engl J Med 2015; 372:351-362

Question 7
A 32 year old male presents to the respiratory clinic with persistent productive cough since a child. He has always been exquisitely prone to develop chest infections. Unfortunately, he is also infertile. Investigations reveal normal immunoglobulins, normal sweat sodium/ chloride, negative skin prick for avian antigens and aspergillus. What is the most likely diagnosis?

C: This is due to a partial or complete deficienty of outer or inner dyne arms of cilia with poor beating. If it is associated with dextrocardia and situs inverts then it is called Kartagener's syndrome. These patients are also infertile. Cystic fibrosis stem would have an elevated sweat sodium and chloride level however care must be taken in interpreting this result in adults. Cystic fibrosis patients have a failure of their vas deferens development. There testes are normal, as is its response to LH and FSH. N Engl J Med 2011; 364:1533-1543
​
Question 8
A 64 year old female presents to the emergency department with type 1 respiratory failure. She has had a chronic cough, fevers and night sweats. She has recently moved to Adelaide after 10 years living in the Northern Territory. Recently her house was rendered unliveable after 2 weeks of chronic wet season associated rains. She has diabetes, chronic liver disease and COPD. Her chest X-ray is shown below

Which of the following treatment options would be most appropriate?

E: This patient is most likely to have melioidosis, which is caused by the gram negative bacillus burkholderia pseudomallei. This organism is found in the soil and rice paddies of SE Asia and Northern Australia, and should be included in the differential diagnosis of any patient presenting with respiratory distress from these regions. CXR may be similar to miliary TB. Neurological melioidosis, abscesses, cutaneous lesions, septic arthritis and osteomyelitis also occur. Treatment must occur for greater than 14 days with ceftazadime or meropenem. Pulmonary TB is also in the differential diagnosis but the stem was pointing strongly towards melioidosis. Patients with diabetes often have more severe disease. Oral therapy after initial IV therapy consists of bactrim AND doxycycline. Clin Microbiol Rev 18: 383, 2005

Question 9
Which of the following organisms if isolated in patients with cystic fibrosis is associated with a poor outcome?

A: Patients who have B. cepacia have a very high associated mortality. The cepacia syndrome is associated with a necrotising cavitating pneumonia. Am J Respir Crit Care Med. 2001; 164:2102 - 2106