A 38-year old garbage truck driver presents to the emergency department with one day of coughing paroxysms and a teaspoon of hemoptysis, which has since subsided. He reports no systemic features. His CXR shows bilateral upper lobe fibrosis with hilar lymphadenopathy. Clinically he saturates at 98% on room air without any evidence of respiratory distress. He was diagnosed in 2013 with sarcoid affecting the lungs and was commenced on a short term dose of tapering prednisolone of 40mg daily.

With regards to the treatment of sarcoidosis, what is LEAST correct?

(A) For 66% of patients, the natural history of sarcoidosis is for remission, with the remaining 33% suffering irreversible organ damage, with only 5% dying of sarcoidosis related complications (mainly respiratory failure)
(B) Hypercalciuria occurs in 40% of patients and is more common than Hypercalcaemia; the pathogenic substrate for the abnormalities relate to increased 1a hydroxylase activity.
(C) Cardiac sarcoid is usually a pathological entity found on autopsy, and effects the free left ventricular wall and interventricular septum
(D) Methotrexate has been shown to be steroid sparing in those patients that are steroid responsive and dependent
(E) This patient should be started on prednisolone 40mg daily as he has end organ failure

E: This patient does not show signs of end organ failure or life threatening organ involvement, and in any case a thorough search for alternative differential diagnosis should be sought after. The option would be different should the patient be in respiratory distress or severely hypoxic. Hypercalciuria is more common than hypercalcaemia, and should be offered to any patient with sarcoidosis. Biopsy is not necessary to diagnose sarcoid especially if they have the common syndrome of arthritis, erythema nodosum and hilar lymphadenopathy – Löfgren’s syndrome. Cardiac sarcoid, when it does occur, typically manifests with conduction delay or a cardiomyopathy secondary to loss of functional muscle tissue (1).

A 23 year old male with metastatic germ cell testicular cancer treated with bleomycin/ cisplatin combination presents 6 months after with progressive breathlessness and non-productive cough. Examination reveals hypoxia to 85% RA, tachycardia and decreased air-entry with fine bibasilar end inspiratory crackles. CXR reveals blunting of the costophrenic angles with sub-pleural opacification. Lung function tests reveal a total lung capacity of 65%, normal spirometry and DLCO of 68% predicted, correctable for alveolar volume. A diagnosis of bleomycin induced pulmonary fibrosis is made. Out of the following statements with regards to this patient, what is FALSE.

(A) 60% of bleomycin is cleared by the liver
(B) Risk factors for bleomycin induced pulmonary disease include age, cumulative dose, renal function, cigarette smoke, and other chemotherapy such as cisplatin
(C) Different phenotypes of bleomycin pulmonary toxicity exist, including subacute pulmonary fibrosis, organising pneumonia, acute chest pain syndrome during infusion and hypersensitivity pneumonitis
(D) Anecdotal studies suggest that supplemental oxygen may be deleterious, therefore the guidelines suggest maintaining oxygen saturations between 88 – 92%
(E) bleomycin hydroxylase, whilst abundant in most tissues, is mostly absent from the skin and lung, in part explaining pulmonary toxicity

A: 80% of bleomycin is cleared by the kidneys explaining renal dysfunction as a risk factor for pulmonary toxicity. In patients with hypersensitivity pneumonitis or organising pneumonia, high dose glucocorticoids are recommended in the management of the patient. It is only anecdotal studies that suggest avoiding oxygen therapy in this condition. Bleomycin seems to exert its chemotherapeutic effect and pulmonary toxicity by forming complexes with oxygen, ferric Fe and inducing breaks in dsDNA (uptodate)

What is the most common radiological pattern of lung involvement seen in patients with interstitial fibrosis secondary to connective tissue disease?

A: Prone HRCT is really only done in patients being investigated for IPF to showcase the early fibrotic changes. The sub-pleural septal and interlobular thickening with subpleural honeycombing is usually basal and posterior, therefore these changes are brought out by gravitational positioning in the prone position. Other radiological changes include sub-pleural honeycombing and traction bronchiectasis. Ground glass changes are seen in NSIP. Granulomas and upper lobe predominance is sarcoidosis, nodules is hypersensitivity pneumonitis (RPA lecture).

What is the most important predictor of mortality in patients with idiopathic pulmonary fibrosis?

What is the most common lung function test pattern seen in a patient with IPF?

In the ASCEND and CAPACITY trials looking at pirfenidone, what was the most common reported adverse event of pirfenidone compared to placebo?

D: Nausea was reported in 100% of patients. Other SE that were more commonly reported compared to placebo include Insomnia, rash and vomiting (1)

Pooling the results of Pirfenidone trials in patients with IPF (ASCEND, CAPACITY 1 and CAPACITY 2), which of the following results is FALSE

A 79 year old female from the country is referred to RPAH with pulmonary alveolar proteinosis secondary to JAK2 negative myelofibrosis. Her exercise tolerance has been gradually declining over the last year, however she has noticed a rapid decline in the last 3 weeks. She has reduced FEV1 compared to her baseline, and is coughing up more brown coloured sputum. With regards to her potential diagnosis, what is NOT an appropriate management step

(A) Admission for IV antibiotics for a presumed infective exacerbation of PAP
(B) Discussion with anaesthetics regarding whole lung lavage under ECMO support
(C) Pulse methylprednisolone and cyclophosphamide, with TMPT levels prior to azathioprine maintenance
(D) Intensive physiotherapy, hypertonic saline nebs and oxygen therapy to maintain saturations
(E) Optimising the management of her myelofibrosis

C: ​High dose immunosuppression has no role in this condition. Rare haematological conditions have been associated with PAP, an overall very rare disease in ILD clinics! Idiopathic PAP may be associated with antibodies to GM-CSF, and trials have generally been unyielding when patients with PAP have been given GM-CSF.
​
1.         King TE, Jr., Bradford WZ, Castro-Bernardini S, Fagan EA, Glaspole I, Glassberg MK, et al. A phase 3 trial of pirfenidone in patients with idiopathic pulmonary fibrosis. N Engl J Med. 2014;370(22):2083-92.
Question 9
The CT scan shows a prone CT. In which condition is a prone HRCT indicated? 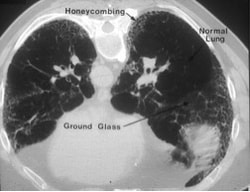 Question 10
Which of the following conditions is associated with a neutrophilic cellular pattern on Bronchio-alveolar lavage?

Question 11
What is the most common cause of clubbing?

A: In one study, 80% had respiratory disorders, and only 5 - 10% had idiopathic or hereditary clubbing.